Carnide is one of the oldest and most populated administrative districts in Lisbon, here we find the largest public housing project on the Iberian Peninsula, the Padre Cruz neighbourhood. 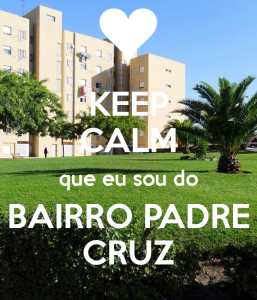 What began as a small neighbourhood of houses under precarious conditions, is now a public housing neighbourhood of concrete constructions, which has expanded over the past few years due to urban development processes and population growth. The neighbourhood currently houses around 6000 people.

As with the Carnide district itself, Bairro Padre Cruz is a neighbourhood of great contrasts, a unique blend of urban and rural, tradition and modernity. It is a multicultural neighbourhood, characterized by both the diversity and the uniqueness of its inhabitants, an ever welcoming and friendly people.

Despite being a public housing neighbourhood (a name that often comes tied to the label “problematic”), there is some community involvement, a motivation and a will to evolve shown by a considerable number of residents.

With the help of the administrative district, and the cooperation of associations such as Spin, initiatives will continue to be developed for the social, cultural and economic development of the neighbourhood, which will ensure that Bairro Padre Cruz, is ideally suited for the implementation of the Live it Lisbon! Summer Volunteer Programme.

Street Art Gallery:
Between October 2015 and 2016 some cultural associations and the Lisbon City Hall called on street artists to give a new face to Bairro Padre Cruz. The project Criar mudança através da Arte Urbana (Making Change through Street Art) and the international street art festival Muro (Wall) made Bairro Padre Cruz into the biggest urban gallery in Europe with 110 graffiti all over the neighborhood.

Street artists from around the globe came to support the idea underlying this initiative: to change the label of this neighborhood and make those who live here proud of their home. Since then Bairro Padre Cruz has been an island within the city, attracting many visitors into this area of Lisbon.

Let's keep in touch! Just leave your e-mail address below and we will keep you posted.